Andros Island
It’s All About the People!

The History and Culture of the Androsian People

Tropical? Yes. Different than what you would expect? Most definitely! Andros is the largest island of the Bahamas and the fifth largest in the Caribbean sizing at 142 miles in length and 40 miles in width. Andros also boasts the third largest barrier reef in the world and intriguing oceanic blue holes which attract many underwater cave explorers. Beneath the surface of the breath-taking sunrises and colorful sea life is sweet children hanging on every word you say and loving families that know no limits. The families, the children, the people is what Andros is all about. Join us and see all the beauty that cannot be summer up in words

The Bahamian Islands were first discovered by Christopher Columbus October 12, 1492, when he landed on San Salvador Island. In the 16th and 17th century the Lukain Indians lived on the islands. The English settlers colonized the islands during 17th century when they brought their slaves from Africa to the island. The settlers began to establish cotton plantations which boosted immigration.  In 1838 many plantation owners gave the unprofitable land to their slaves and moved back to England.

The English Government also kept watch over the Atlantic Ocean to catch the slave traders in action.  Many of these people that were captured were dropped off at the nearest port of the island, and then later became the inhabitants/citizens of the island. Other residents can be traced from the West Indians and Seminoles from Florida.  The Seminoles would travel to the closest island from the American Coast and when those islands became overpopulated, they moved to what is now known as Andros Island, the largest island on the Bahamas

People and Settlements As people began to inhabit Andros, settlements such as Staniard Creek, Nichols Town and Mastic Point arose as the first communities. Once these settlements became overcrowded, people began to migrate to other areas of the island such as Red Bay and Fresh Creek.  At first, the settlers attempted to farm the land of Andros, but being mostly limestone, the lack of fertile soil led them to other forms of trade.  The people discovered trades such as sponging, fishing, basket weaving, woodcarving and fabric crafting which became a unique aspect of their culture.

The community of Red Bay is an excellent example of the culture that thrives on Andros.  Right off the sandy white beaches of Red Bay, natives spend the day on the ocean harvesting sponges to bring back to shore.  Here the sponges go through a distinctive process of drying and cleaning to prepare them to be sold all over the world. Sponge finshing is one of the most important forms of income.  In the heart of red Bay people like Henry Wallace, Omelia Marshall and Scrap Iron continue to preserve the unique culture native to Red Bay and Andros.

Henry Wallace is a well-known wood sculptor in the Red Bay community.  Carving wildlife and marine life, Wallace uses native woods such as mahogany and horseflesh to craft his many masterpieces.   Not only has Wallace been acclaimed a living legend by the Bahamian government, his self-taught talent has been displayed and recognized in and shown across the United States.

Omelia Marshall is a highly acknowledged medicine woman and midwife of Andros Island. Mrs. Marshall uses the medical knowledge taught by her mother using indigenous plants for medicinal purposes  to cure the aches and pains of the island. Having a reputation for longevity, Mrs. Marshall attributes her bush medicine for keeping her healthy.  There are nearly 100 medicinal plants in all of the Bahamas, and many of these forms of vegetation are grown by Mrs. Marshall in her yard.

Along with these cultural qualities, the Androsian people also have the ability to construct exceptional baskets.  The technique of basket-weaving has been passed down from generations and friends.  A native man nick-named “Scrap Iron” is found daily practicing this process taught to him by Mrs. Marshall.  Scrap Iron’s creating stunning baskets is but a reflection of his colorful personality.

Another trait of the Androsian people is Androsia, a batik fabric, which is manufactured at Androsia factory in Fresh Creek since 1973.  The bright colored fabric is not only a unique aspect of Andros culture, but also captures the inimitable splendor of the Bahamian environment in the fabric prints.  Although Androsia is strictly native to Andros, it is shipped throughout the world.

In addition to the Andros culture is the structure of marriage and child birthing.   In later years when a man turned eighteen he was expected to earn money for a home.  The females would begin earning dowry at the young age of thirteen.  Marriage could take place when the man could provide a home and financial support for them.  Family is a vital part of the peoples lives.   If you were married you were expected to have many children which were also a sign of masculinity.  Large families are still a very important part of the Andros Community.

Since family life is such an important feature of the Androsian culture, the few shops and businesses are family owned. Terpy Riley, a native of the Bahamas, states “most people travel to Nassau and Freeport because of the lack of jobs on Andros.”  Riley discussed that the tourism industry is one of the main sources of income for the people of Andros. Many natives sell pieces of their culture such as wood carvings and baskets to tourists who visit the island.

Andros being the bone fishing capital of the world, Fishing is also a major form of income.  Due to the large size of families and the lack of money for college, most teenagers begin working straight out of high school.  According to Riley, most children of Andros start school at age five and continue through high school.  Those who can afford college attend the College of the Bahamas and privileged ones attend a school in the states.

The people of Andros are especially spiritual.  Baptist, Presbyterian, and Catholicism are an example of the types of the denominations on the island.  Although some may not claim a denomination, they are spiritual indeed.  This is evident in the spirituals sung by the kitchen staff at the Forfar Field Station, and by the reverence surrounding what life is about for them.

The culture is vital to the Androsian people. Each year they celebrate many blessings of their freedom, customs, and civilizations.  The main celebrations of Androsia include: Junkanoo, Goombay, Crab Fest and Regatta. Junkanoo, is one of  the largest and most traditional, is celebrated around the Christmas and New Years season.  The roots of the celebration are traced back to West Africa.  The slaves of Andros adopted the celebration to coincide with their own culture.  It was a time during the season when slaves had received vacation time for the holidays.  Slaves would dress up in costumes and dance to the rhythm of music and drums.  Today Junkanoo is still highly celebrated and lasts for days with music, food, and tons of fellowship.

As you look through these pictures and saw the beauty for yourself, one must definitely say Andros is very unique indeed.  We as a class could only experience the culture firsthand when we immersed ourselves into the mixture of people on Andros Island.  The only way to truly experience anything is to fully immerse oneself into their world.  Since 1973 when the Commonwealth of the Bahamas separated from England, Andros individual culture flourished.

Although we have still found that the culture had many different influences on language and government from the British, population influences from African ancestry, and lifestyle and religion influences from the Caribbean.  Peaceful, easy going, and friendly are some of the many qualities the islanders possess.  The history and cultural identity of the island is being preserved despite the reality of a rapidly changing society.  The islanders seem happy and will continue to be consistent in their beliefs in family, love, and remembering their roots despite the changing society we live in.  A tropical paradise is definitely the exterior of the island.  Beneath the picturesque surface, Andros is all about the people. 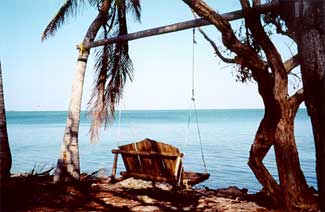 And its all waiting for you!